Falling Icicles made their debut in my area 2009.  Initially they were hideously expensive and hard to find.  But secretly I always knew I would get some.

Then least year Big-W  / K Mart started sell small falling Icicles  sets ( 300mm long light bars) that that ran independently of each other.  closer inspection revealed some kind of controller at the top of the PCB. Unfortunately I didn’t have the time nor money to purchase a number of the ready made units.

I hacked together a design that will allow considerable flexibility.  The general concept is to create a small DMX based 16ch Controller that uses LED Constant Current drivers.  The Controller will be mounted at the top of the Icicles.   The LEDS will NOT be PCB mounted, but rather will be wired to suspend inside  1/2″ PVC tubing.

Let me stop here and say the biggest influence on my design was N1ist’s Color Sticks over as DIYC.com.  The two projects share a great number of common components.  Details of Mike’s project can be found here.

The Schematic for the controller available  here. <place marker only>

The final LED spacing has been on my mind for a while now.  I figure I need to address a number of areas:

The LED view area has a large affect on the the final product.  Most 3mm LEDs are very directional.  Sanding the LED surface may be a solution to diffuse the LEDs.  3mm Top hats may also be the best way to go. 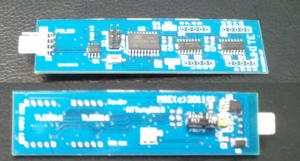 I suddenly realised the Top LED segments MUST be channel 16.  this is no big issue but is makes chasing Lights easier if this is the case.  The SPI will clock out channel 16 first.

If I can I would like to build in some smarts in to the Controller.

The easiest options it to treat this like every other 16 channel controller and allocate 16 DMX channels.  This offers a would of flexibility.

However the more I think of how I want to use these icicles the more I reckon a simple single channel will be able to achieve everything I want.  So here is what I am thinking:

the down side to such a method is remembering specific functions when programming vixen.